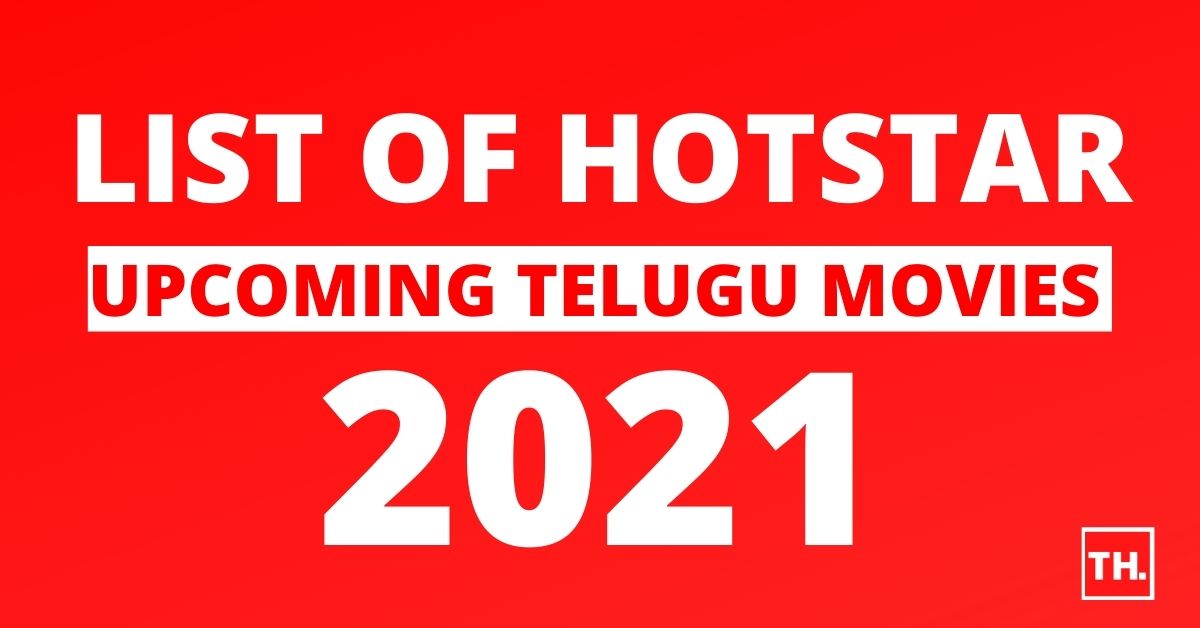 Many web series like Hostages, Criminal Justice and others have been released on the Hotstar platform and this is the sure shot that Hotstar is giving tough competition to other platforms as well. Last year 2020 was a wonderful year for the hotstar. With the release of Dil Bechchara, Laxxmi Bomb and others have increased the number of subscribers to this platform.

Now Hotstar have also mingled with Disney studios. So every marvel studios latest updates are available on this platform. Apart from this Disney+Hotstar has focused on the telugu movies as well. From the likes of Ammoru thalli, Prathi Roju pandage and Meeku Mathrame Cheptha have released on this platform and people loved the movies so much.

The benefit of choosing an Telugu movie over the OTT Platform is. The movies can be later dubbed as well, So you can target the north and south Indian regions of this country. With just few movies. So here are the upcoming telugu movies in Disney+Hotstar.

This is a web series and with this web series, Kajal Agarwal is making her OTT debut. The show is set to release on Hotstar very soon, The teaser of this horror series has dropped online and it is enthralling and engaging as well. This web series is directed by Venkat Prabhu. This is also his digital debut. The release date hasn’t been mentioned yet, We have to wait for the official confirmation from the officials.

Recently Hotstar has released a teaser of November Story. In which we are going to see the digital debut of Tammannah Bhatia. November story is a thriller web series, and many other actors like G.M.Kumar, Pasupathy and Vivek Prasanna are also seen in this web series.

By decoding the teaser, We can see the story is said in the perspective of Anuradha that is the role played by Tammannaah. This web series is directed by Ram Subramanian who is also making his digital debut and this project is ventured by Ananda Vikatan Group.

As of now these are the hotstar specials mentioned officially by the Hotstar team. We have to wait for more movie details and other information.

Disney+Hotstar is one of the largest streaming services available in India. You can watch movies and serials based on the genre as well. This platform provides 17 languages content to the audience and it has 300 million active users as of now. The streaming service is handled by Star India, and every star network content is available on this platform. This streaming service has made partnership with Walt Disney company as well. So you will have the access to all Disney movies and Marvel Studios movies and web series as well.

Disney+Hotstar has hands spread across almost all the Indian Languages like Hindi, English, Telugu, Tamil, Kannada, Malayalam, and other regional languages as well. Even serials are available in different languages in this platform. For example, Mahabharat its available in Hindi, Telugu, Kannada, Tamil as well.

How to watch Latest Movies on this platform?

Disney+Hotstar layout is user-friendly and its excellent as well. You can search for any movie on this platform quite easily. This platform gives new movies and old movies as well. Even Original Content produced by Hotstar are also available and they are wonderful. For example, Criminal Justice is a wonderful web series. Not even that you can also many international web series as well like Game of thrones. The craze of OTT platforms has begun with game of thrones itself. Hotstar has set a standard in the terms of proving the content to the audience.

What are the subscription plans of Disney+Hotstar?

There are three different plans available on this platform and they are: The first is one Disney+Hotstar free. In this you can watch some movies and web series for free, You don’t have to pay a single penny as well. Second Disney+Hotstar VIP, In this the charges will be around 399Rupees/Year. You will have the access to VIP services of this platform and the last but not the least Disney+Hotstar Premium. This costs 299Rupees/month and 1,499Rupees/Year. In this you will have access to new movies, new web series and new documentaries available on this platform. These plans are affordable to the common people as well.

You can also download the movies and web series on this platform and watch them offline. So these are upcoming projects on Disney+Hotstar streaming platform.