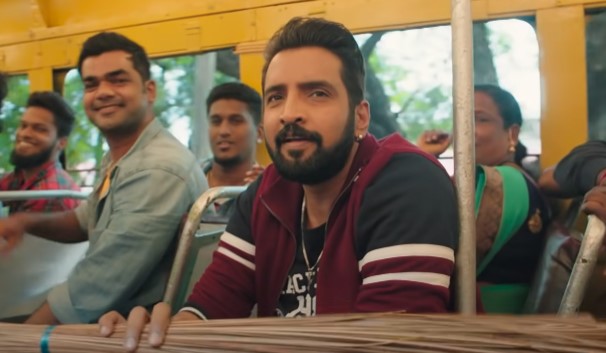 Coming to the Story, Parris Jeyaraj (Santhanam) who was a youtube Gaana singer becomes an alcoholic due to Love breakup. Later he falls in love with Divya (Anaika soti) whom he once meet at college Event. Divya also has a breakup story in past same as jeyaraj. Then She loves Jeyaraj after some days. Conflict in this story starts when divyas’s previous boy friend enters.

Parris Jeyaraj movie was produced by K. Kumar on banner Lark Studious. Other lead characters in this movie are Pridhivi raj who played Jayaraj’s father character and Motta Rajendran who acted as father of Divyas’s Ex-boy friend.

Parris Jeyaraj is a Complete Comedy action movie. The humorous scenes of Santhanam and pridhviraj are highlight in this picture. Santosh Narayan composed music and Cinematorgaphy was done by Arthur A. Wilson. Film was released coinciding valentines day on 12th February 2021.

Parris Jeyaraj dubbed Telugu Started Streaming on OTT from 4th June. Its a youth entertainer movie with Comedy Genre. Santhanam’s humorous timing of the move is highlight. If you want to chill with fun then watch this movie.

Movie was a super hit in tamil and that is the reason which was made available in Telugu. Be away from Piracy and save Movie artists.