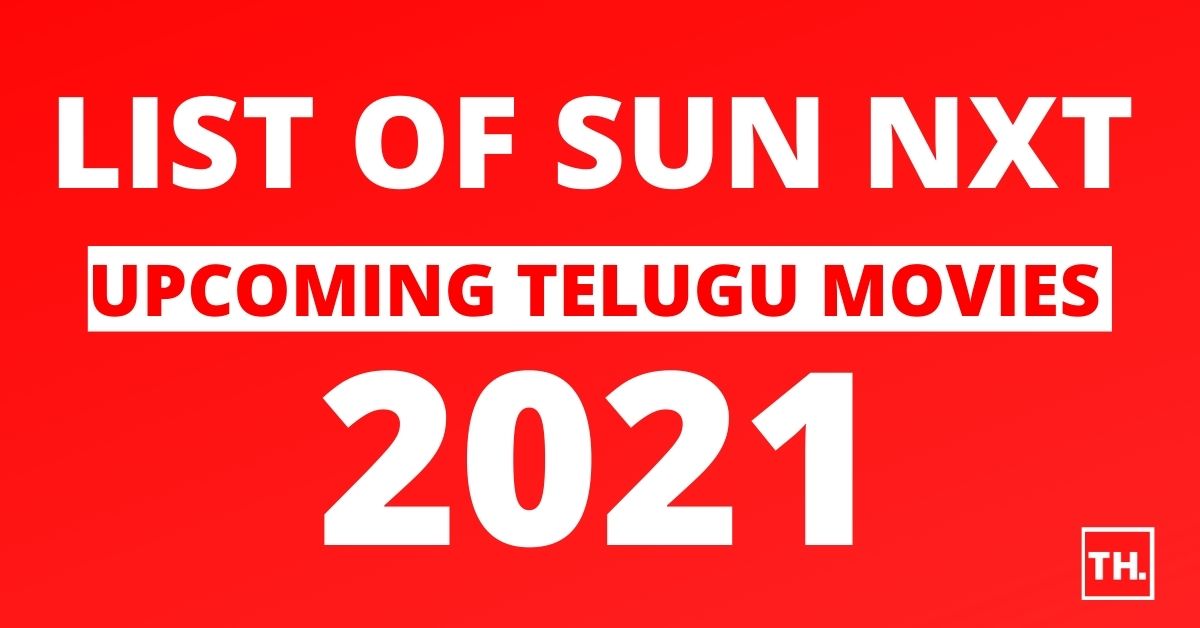 Sun NXT is the Number one OTT platform in South India. This is handled by Sun TV networks and all the serials, movies and documentaries which are telecasted on Sun TV channels are also available in this OTT Platform. From News to Comedy shows, From Music to Daily Serials are available in this platform. You can also enjoy new movies, reality shows and others in SUN NXT App. Not only in telugu, But the content from Tamil, Malayalam and other regional languages of India are available in this app at a very low price. In 2020, Ala Vaikuntapuramlo was first streamed on Sun NXT app itself and Bheeshma as well. Now in 2021 what are the movies which are going to come on Sun NXT app.

Alludu Adhurs is a comedy entertainer with some horror stuff included in it. This movie is directed by Santosh Srinivas and the movie is ventured by Gorrela Subramanyam. The lead roles in this movie are played by BellamKonda Sai Srinivas, Nabha natesh and Anu Emmanuel. DSP has handled the music work for this movie, The movie has released on Sankranthi and it got mixed response from the audience. The digital rights and telecast rights are brought by Sun Network. The digital streaming of this movie is expected to happen somewhere around February.

Red is the remake of the Tamil Blockbuster movie Thadam. This an action and thriller movie directed by Kishore Thirumala, The movie is produced by Ravi Kishore and Mani Sharma has composed the music for this movie. The lead roles in this movie are played by Ram Pothineni who will be seen in two different roles. The supporting roles are played by Malvika Sharma, Amritha Aiyer, Nivetha Pethuraj, Sampath Raj, Vennela Kishore and many others. The movie released in theatres on 14th Of January 2021 and the talk is excellent. People are loving the excellent energetic performance of Ram Pothineni and the twists and turns in this movie are top notch. The music and the BGM are up to the mark. The digital rights and telecast rights are brought by SUN NXT app. The movie is expected to stream somewhere around February.

As of now, These two movies rights are brought by SUN NXT app. If they buy any other movie rights, We will definitely update.

How to take subscription for SUN NXT APP?

Many movies, Serials and other videos are available in SUN NXT APP. As of now the SUN Network company is offering three subscription plans for the users and they are 50 Rupees/ 30 days which is a monthly plan. 130 Rupees/90 days which is the quarterly plan and 490Rupees/Year. If you subscribe to this platform, The first 30 days is the free trail period. This app is available on Android and iOS or you can directly stream from the web broswers as well.

Apart from this music videos, Comedy Videos, Live TV news channels are available on this platform. As mentioned above, SUN NXT is the top OTT Platform especially in the southern regions of India. The content released on this platform is wonderful and even the prices mentioned above are affordable for the common users as well. So go and download the SUN NXT APP on your device. Choose a subscription plan and enjoy watching the New and Old Movies, TV Serials, Music Videos and many other videos on this OTT Platform.

There are many huge advantage of subscribing with Sun NXT app.

Why SUN NXT APP Is the Best for Telugu Movies?

SUN NXT is a digital platform handled by Sun networks. And the Sun networks channels are across all the south India languages. Sun Networks are one of the most popular media creators. They have channels in Tamil, Telugu, Kannada, Bengali and Malayalam as well. So if you want to see a telugu movie or a serial then you can watch it by subscribing for their premium plan and you can also enjoy other language films and serials as well.

If you are a serial watcher and if you have missed the show because of some urgent work at home or office. Then whenever you are free, You can just watch the serial on this SUN NXT app. Not only serials, Movies, Comedy shows can be seen anytime, anywhere you want.

Sun NXT has old movies list as well. If you love classics and old movies. You can just search for the movie and watch it on this platform.

Apart from telugu movies, You can watch also Telugu Dubbed movies on SUN NXT App. That is the biggest advantage of this platform.

There is no downloading option available in this platform. You just have to stream and watch the content on the app itself. So these are the upcoming movies releasing on SUN NXT APP. We have to wait for official confirmations of more movie releases and details for now.